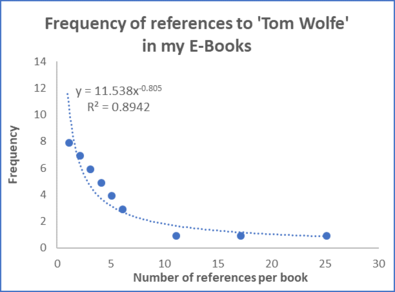 Thinking about the writer Tom Wolfe, who died on May 14, I searched for his name across all my e-books. Up popped some thirty-six, leaving aside Wolfe's own novels and essays, containing a total of 151 references.  An interesting fact of probably no relevance, the references were apparently distributed according to some power law. (See figure). There were, for example, eight books with one reference, seven books with two references, six books with three references, and so on, up to one book with twenty-five references. This last was Dwight Macdonald's two-part attack on Wolfe's 'New Journalism' - Parajournalism: Or, Tom Wolfe and His Magic Writing Machine - in the New York Review of Books in 1965 and 1966. [1]

Macdonald is in part rebutting an article by Wolfe in the New York Herald Tribune, Tiny Mummies! The True Story of the Ruler of 43rd Street's Land of the Walking Dead!, a takedown of The New Yorker magazine's inflated reputation. [2]  I can't help think Macdonald had a point:

Parajournalism seems to be journalism—“the collection and dissemination of current news”—but the appearance is deceptive. It is a bastard form, having it both ways, exploiting the factual authority of journalism and the atmospheric license of fiction. Entertainment rather than information is the aim of its producers, and the hope of its consumers...

The specific Kitsch device here is intimacy. Intimacy with the subject not in the old-fashioned sense of research, but an intimacy of style: the parajournalist cozies up, merges into the subject so completely that the viewpoint is wholly from inside, like family gossip.... There is no space between writer and topic, no “distancing” to allow the most rudimentary objective judgment, such as for factual accuracy.

The factual inaccuracies Macdonald alleges are not huge. They don't blunt the point of Wolfe's criticism of the The New Yorker. And yet, and yet ... they're inaccuracies about just those telling details that set you chuckling, create a vivid imaginative world, and pull you right into a Tom Wolfe piece. Here's a typical bit of Wolfe business from 'Tiny Mummies!':

They have a compulsion in The New Yorker offices, at 25 West 43rd Street, to put everything in writing. They have boys over there on the 19th and 20th floors, the editorial offices, practically caroming off each other - bonk old bison heads! - at the blind turns in the hallways because of the fantastic traffic in memos. They just call them boys. “Boy, will you take this, please….” Actually, a lot of them are old men with starched white collars with the points curling up a bit, "big lunch" ties, button-up sweaters, and black basket-weave sack coats, and they are all over the place transporting these thousands of messages with their kindly old elder bison shuffles shoop-shooping along. They were boys when they started on the job, but the thing is, The New Yorker is 40 years old…[and] they all have seniority, like Pennsylvania Railroad conductors.

But no, says Dwight Macdonald, a staff writer for The New Yorker, there are only two or three memos a year, and "in fact all but one of the office boys are in or just out of their teens."  And no one calls them "Boy."

So here's the dilemma you get with Wolfe. Do you want to give up this marvelous, grotesque, Dickensian world of shoop-shooping elderly bison bonking heads on the blind corners, just because it's - you know - not true?  It's troubling.

Yet Macdonald missed something when he concluded:

I don’t think Wolfe will be read with pleasure, or at all, years from now, and perhaps not even next year ...I predict the subjects will prove of ephemeral interest and that the style will not wear well because its eccentricities, while novel, are monotonous; those italics, dots, exclamation points, odd words like “infarcted” and expressions like Santa Barranza! already look a little tired in his recent Trib pieces.

For here we are 50 years later, still dipping with pleasure into The Last American Hero, from The Kandy-Kolored Tangerine Flake Streamline Baby. 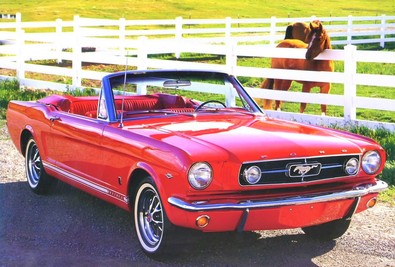 We all know at some level there never were such luscious, lascivious colors as Rake-a-cheek raspberry and Nude Strand coral - but, God! -  don't we wish there were? You're shaken by the sheer bravura construction of that second sentence. The compound subject runs on and on, ratcheting your anticipation ever higher, through this fantastical list of ravishing, ideal colors, before you finally hit the main verb, and can slump to the ground in pleasurable exhaustion, to soak up that mothering old North Carolina sun.

But back to my e-book list, which shows the breadth of Wolfe's infiltration into American culture, and not just the literary but also the political, historical, sociological and scientific culture.

Many are, as you'd expect, works of literary or film criticism.  Here, with Dwight Macdonald, are Martin Amis, John Updike, Joseph Epstein, Christopher Hitchens, Roger Kimball and Hilton Kramer, Clive James, Harold Bloom, the film critics Pauline Kael and David Thomson on the movie versions of The Right Stuff and The Bonfire of the Vanities, and the Oxford Dictionary of Literary Terms.

Perhaps surprisingly, there are even more Wolfe-referencing books in a loose category of politics, history, sociology, economics and philosophy.

By 1992 Francis Fukuyama was already using Wolfe's bond-trading 'Masters of the Universe' as exemplars of the self-inflated but fundamentally unheroic human types at the end of history, in The End of History and the Last Man.  Harvey Mansfield's Manliness uses characters in Wolfe's novel A Man in Full to illustrate the notion of Stoicism as the proper philosophy of manliness.

The African-American writer Shelby Steele describes how, during his radical phase he traveled to Algiers, in 1970, when it was still one of the 'revolutionary capitals' of the world. Here he ran into 'DC,' an American Black Panther in exile from American law enforcement. This is from Steele's book Shame - How America's Past Sins have Polarized Our Country:

I learned that the man we knew as DC had achieved a quick moment of fame before disappearing into exile. In 1970, Leonard Bernstein, the great Broadway composer, had held a fundraiser for the New York Black Panthers in his opulent Park Avenue apartment. The social critic and “new journalist” Tom Wolfe made this party the stuff of legend by writing about it, first in New York magazine and then in his famous book Radical Chic & Mau Mauing the Flak Catchers. Here on indelible display was the pretentiousness, self-congratulation, and self-effacing political correctness of wealthy whites seeking a kind of moral authenticity through mere proximity to “angry blacks.” Wolfe’s description of this party was far ahead of its time as a portrait of white guilt.

DC had been the Panther spokesman at the event. When Bernstein asked him what “tactics” he would use to achieve his goals, DC said, according to the New York Times, “If business won’t give us full employment, then we must take the means of production and put them in the hands of the people.” Bernstein replied with that ingratiating white-boy hipness that makes people cringe, “I dig absolutely”—thereby effectively endorsing a Marxist revolution from his Park Avenue apartment if blacks did not get full employment.

(That's not the only way to read Leonard Bernstein's famous fundraiser, of course. The left-wing Jewish paper The Forward defends him from Wolfe's 'savage takedown' here, presenting Bernstein as a straightforward civil libertarian.)

Historians of post-war America like James Patterson (Grand Expectations - The United States, 1945-74) and David Frum (How We Got Here - The 70s: The Decade that Brought you Modern Life) reach easily for convenient Wolfean tags like "The Me Decade", "The Third Great Awakening" and "Let's Talk About Me!"  More interesting, perhaps, is Colonel Harry G. Summers' On Strategy: A Critical Analysis of the Vietnam War. Col. Summers draws on bits of Wolfe to document the cultural revolution of the 1960s and 70s, which transformed the American way of making war, though not, he thinks, as it ought to have.

The most engaging and off-beat use of Wolfe by a historian is in Wendy Doniger's The Hindus: An Alternative History,  in a section on the four 'Royal Vices' 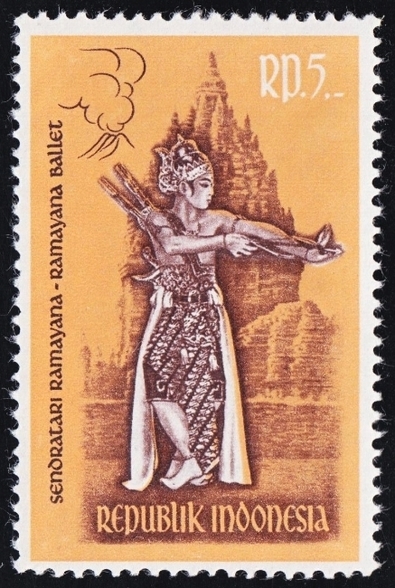 to which ancient Indian kings and warriors were prone - gambling, drinking, fornicating and hunting.  Hunting in particular:

is the most obscure of the vices to the mind of nonhunting Euro-Americans, but it shares the quality of “just one more”—there are many stories of hunters who kept going even after they knew they should turn back, until they found themselves benighted or in a dangerous place, or both...

To which is appended this footnote:

The contemporary equivalent might be the Bonfire of the Vanities syndrome (from Tom Wolfe’s novel), in which rich people in their Mercedes accidentally end up in a really rough part of the Bronx, and the nightmare begins.

And then there are the natural scientists.  Matt Ridley in The Red Queen: Sex and the Evolution of Human Nature talks about a species of Finnish owl that is normally monogamous, except in prosperous years, when prey is plentiful, when some males are able to hoodwink more than one female into striking up relations - "like Sherman McCoy in Tom Wolfe's Bonfire of the Vanities who keeps an expensive wife on Park Avenue and a beautiful mistress in a rent-controlled apartment across town."

Ridley summarizes the current state of evolutionary science on why human brains and intelligence grew so large. It was to facilitate human communication, yes, but not mainly to transmit information, as if we were some species of thick-spectacle-wearing intellectual owls. No, it was communication to manipulate and deceive each other in the pursuit of our selfish ends, while foiling the attempts of others to deceive and manipulate us in just the same way.  This is why gossip and status games are the fundamental activity in every human society, from multi-millionaire champagne-socialists on the Upper East Side of New York to the most remote tribe of hunter-gatherers on the upper Amazon. It's why Facebook is the world's gossip network and an obnoxious Mark Zuckerberg among the wealthiest men in the world. And that's why:

Virtually all novels and plays are about the same subject, even when disguised as history or adventure. If you want to understand human motives, read Proust or Trollope or Tom Wolfe, not Freud or Piaget or Skinner. We are obsessed with one another’s minds.

Well, I could plod on to look at Stephen Pinker's magnum opus The Blank Slate - The Modern Denial of Human Nature - and his perhaps overly respectful discussion of Tom Wolfe's opinions on the moral implications of evolutionary psychology and neuroscience.

But I'm plumb wore out. I'll leave it here.

[1] This essay is republished in the 2011 Dwight Macdonald collection Masscult and Midcult. Essays Against the American Grain.

[2] 'Tiny Mummies' is republished in Tom Wolfe's 2001 collection Hooking Up.